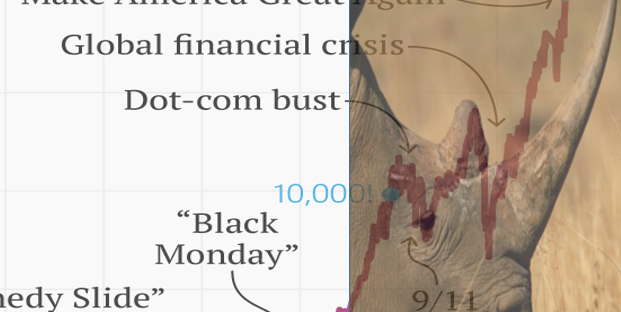 It has been awhile since my last post so I am going to dive right in head first. This post is going to branch out from the rest the blog in several ways. The first way is the topic, The Stock Market. The second way is I am going to propose a way to save some people over $100,000… Here it goes.

The stock market is typically referred to as a bull or bear market. The bull being growth, fueled by optimism. The bear, decline being fueled by pessimism. This past week the Dow Jones Industrial Average (in the US usually just called the stock market) surpassed 26,000 points for the first time in history, after passing the 25,000 points just seven trading days prior. Since the presidential election of Donald Trump the market has risen 40% in one year!

I would like to suggest a new term for the trends the market has shown the past few years. I do not see the market as a bull or a bear, it is a Rhino. I have been discussing my concerns about the stock market with my brother and dad and I like how my brother describes the market as a Rhino. “It’s huge, you know it’s bad, it’s not sneaky at all, experts are saying that it’s dangerous but ‘it can’t be that fast’, until it takes off at 35 MPH and gores you into a pulp.” I also liked the following acronym to go along with my feelings toward the market this past year. Oh, and when charting the stock market the Sub-prime Mortgage Crisis of 2008 and the current expedited growth kind of looks like the profile of a rhino… I guess that is the biology teacher in me.

The end bit of my brother’s rhino description, the “gore you into a pulp” piece, is where I would like to focus some attention. Documentaries like Boom, Bust, Boom do a nice job explaining the natural ebb and flow of markets throughout history. A fall seems to predictably follow a rise, especially a sharp rise (sometimes called a melt up). The 2015 blockbuster film The Big Short explains very well the background investing issues with the Sub-prime Mortgage Crisis, and how greed is poisoning the notion of honest investing. Perhaps more should see Gordon Gekko’s speech about greed being good, and work to help keep the top tier accountable…

After the sub-prime mortgage crisis, it was not uncommon for the average investor to lose roughly 40% of their retirement account. Obviously, since then this has been recouped plus some if someone chose to just “ride the market out”. To prevent the next big set of losses I am suggesting this. If you have a 401k, 457, 403 etc. retirement account, find out if you have the option to reallocate YOUR money into a stable fund. This is your money so have an honest conversation with your broker if things start to look really bad.

Hindsight being 20-20, if you had moved your retirement account to a stable fund during the 2008 recession, you would have not continued to lose money, and maybe even gained a very small amount of interest on the cash you have. Instead of losing 40%, you would have lost a small percentage at the beginning of the market downturn, and then locked your money in a stable value to ride out the storm. You could then freely reallocate your money back into an account once the market sorts itself out.

Not trying to be too much of a conspirator, but I think the real big wigs (banks, hedge funds, millionaires) are fine to let the market build on unstable ground and are going to be the first to bail on the market. By letting the market build they are gaining access to funds from many small investors, which they did not necessarily have access to before. Unless you are in dividends you primarily make money by selling an investment for more than you bought it. Isn’t that rule number one of investing? Buy low, sell high. The only people who profit are the fund managers and investment brokers until the investment is sold.
By building total investment in the market and then being the first to sell they will cash in something huge. Then, usually a recession lasts a few months and they can repurchase positions “on sale” starting the cycle to profits over again unless some kind of accountability and risky investing laws change.
In discussing this idea of another recession with my dad he asked, “So what is your money in now?” I told him “Large cap funds and Emerging Markets.” After just talking about an inevitable market downturn he looked perplexed, so I added, “because they are outperforming the default ‘Target Retirement fund.” He kind of laughed at the duality of my thoughts and my actions, but I plan to ride this Rhino as long as I can knowing I have the ability to move my money to a stable account and avoid the goring many people will someday endure. Peace.
Some articles to support some of these feelings (biased but I think worth pondering):
“Armageddon” from bond sell off
Move Money to Cash
The next stock crash
Bond Yields
Melt-up